Bogie Hendricks is a STAR!

Previous Next
Bogie Hendricks is a STAR! 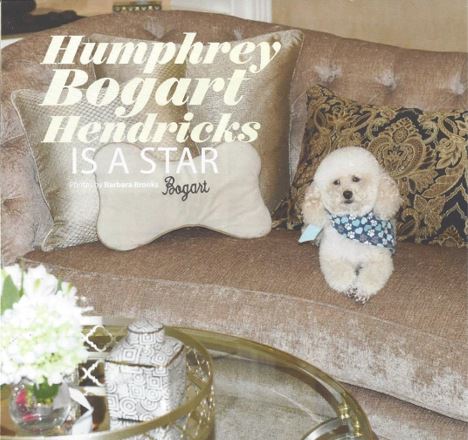 (Article published in “The Link” magazine January 2018 – Photography by BarbaraBrooks.com)

Why the Hollywood Moniker?  Mia Hendricks was a teen when the family picked Bogie out of a litter with an area breeder.  Born in 2013, Bogie was the ‘runt’ of five pups.
“The name was Mia’s choice because Bogie would walk around sporting a stick in his mouth, which looked like a cigar and reminded her of the famous actor, Humphrey “Bogie” Bogart.  The name stuck.  It’s funny because most people under the age of 40 don’t know who Humphrey Bogart is,” Mia’s mom, Paula Hendricks said.
Paula remembers that it took the family five hours with the puppies until Bogie ‘picked

them’, as the breeder would say.  “It’s actually a funny story,” Paula said.  “Our dear friends and neighbors, the DeMarcos, brought two adorable puppies named Teddy and Bear to our home on Christmas, 2013.  We immediately fell in love with them.  Mia and I secretly decided to visit the breeder, who was in Grass Valley, later that week.  When we picked our puppy, little did we know that he was actually the brother of Teddy and Bear.  The breeder never told us until we picked our guy.”

The toy poodle spends time among the Hendricks’ family’s offices, spreading his love and comfort to all.  His favorite person is Paula’s sister, Victoria (auntie V), who spoils Bogie by carrying him around the office like a baby.  Some of Bogie’s favorite activities are going for walks, and even grocery shopping with Paula – she carries the tiny dog in a sling while she shops.
“He gets lots of attention from everyone, and he loves car rides, dinners out, and plane rides,” Paula said.  “He has traveled to many states in the US and enjoys getting petted by other passengers.  Oftentimes, the pilot will come out and ask to pet him too.  One plane ride, the pilot took a selfie with Bogie and sent it to his daughter.”

Bogie is Paula’s first dog, and since she didn’t know much about raising a puppy, she did some ‘serious’ dog training, mostly for herself.  She said that dogs aren’t badly behaved, it’s just that owners don’t always train their dogs properly.  Bogie and Paula took training courses for over a year.  The result is that Bogie is ‘quite the proper poodle.’
He can walk anywhere off leash, will ‘stay’ until he is released, and Bogie only begs for food at home, never when he is in public.  He is classified as a ‘service animal’ and goes everywhere with the family.  Bogie is also a trickster.  He loves to give ‘touchdowns’, high fives, and he twirls, dances, boxes, snorts on demand and says “I love you”.
“He truly has been a wonderful addition to our family and is the consummate companion and supportive friend,” Paula said.  “People always tell us that he is so spoiled but we all reply with, ‘no, it is us who are spoiled by his love’.”
2020-01-10T18:39:13-08:00By PaulaHendricks|BLOG|