Previous Next
Cassie Lost Over 50lbs and Seven Dress Sizes

That was the post I wrote on Facebook the first day I started my diet journey in August 2011.  I was scared. I was afraid that I would fail like all the other times I have tried in my attempts to lose weight. 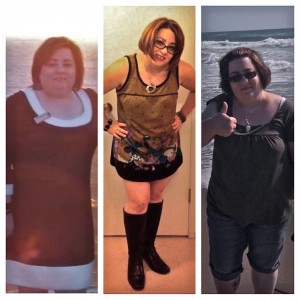 In June of 2011, I lost my mother who lived in Kentucky and only five days later, my mother-in-law passed away here in California. Between the stress, grief and the constant traveling back and forth to Kentucky, I gained another 13 lbs in the month of June alone. I was now a whopping 183 lbs. and at a height of 4’10”, I had become severely obese.

In August 2011, I first started seeing Dr. Hendricks and the team at The Center for Weight Management.  I was severely overweight.  I followed his advice and slowly started to lose weight.

I lost 10lbs pretty rapidly, then my body said “I’M DONE” and I started losing only five lbs. per month.  I’ve talked to other patients who had rapid weight loss and I’ll admit I was jealous!  BUT…I knew slow and steady wins the race and I knew every five pounds I lost would get me 5 pounds closer to my goal.

To date, I’ve lost almost 50 pounds and 7 (SEVEN) dress sizes!  A 50-pound weight loss on my body is equivalent to about an 80- pound loss for an average-sized person!  Now when I run into someone who hasn’t seen me in a while they do a double take because they don’t recognize me! I kind of like that…

Here’s what I have learned on this continuous journey:

Get support! I am a huge Facebook user! I decided if I put it out there for the world to see, I would be more committed to lose and thus be successful. The support was amazing! I also set up a photo album called “Cassie’s Weight Loss Album: The Pictorial Journey of a Skinny B*&% Trying to Break Free” and posted several “before” pictures and as the weeks went by, I would add an updated picture and slowly I could see the progress I was making. The support was almost overwhelming! The comments people would leave kept me encouraged and motivated me to keep going. Even people I didn’t know would leave me messages telling me how great I was doing and how I inspired them to start making changes! I used social media to my advantage.

Get moving! I found a personal trainer and I started going to her three times a week. So now with my exercise routine and with the eating plan and support from Hendricks For Health, I REALLY started seeing results! For a while, I was averaging a loss of an inch a week! If a personal trainer isn’t for you, then go to a gym, use the stairs instead of an elevator, dust off that treadmill that you’ve been using as a coat hanger, walk, ANYTHING! I just signed up for my first 5K race and I never thought I would say this but I am excited to run!

Don’t ever, EVER give up! There were times I was in tears because it got too hard and I wanted to bury my face into a pizza and just quit. DON’T! Use the tools you have available: The encouragement of friends and family, online support groups, and the team at Hendricks For Health.  Try on an old pair of jeans and feel how baggy they are getting!  Look at old pictures when you were heavier and know that you CAN get healthier and you CAN get to your goal! 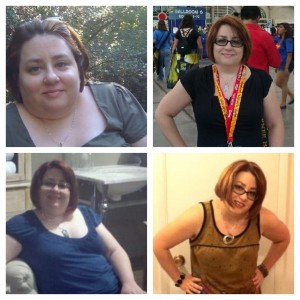 Right now I am only 15 pounds away from my goal. – ONLY 15 lbs.!  I have been sitting at my current weight for the last six months and I still get frustrated despite my success. There are times I get on the scale and I want to quit. Why haven’t I? Because I have come this far and there is no way I’m going to give up! Even if I don’t ever make it to my goal weight or the jean size I was hoping for.  I know what I have overcome and I have accomplished! I am healthier. I am happier. I have more confidence when I socialize because even though I may be the shortest person in the room, I am no longer the heaviest.

This path I have chosen has absolutely had its bumps, dips, turns and roadblocks but each step I take I get closer to my goal. Don’t be afraid to take that first step and even though the road may get rough, don’t give up because the view is going to be amazing.  It is for me.

Thank you everyone for helping me through my journey to success!